Title: Irrevocable
Series: The Exiled Eight MC #1
Author: Addison Jane
Genre: Contemporary MC Romance
Release Date: August 6, 2018
Blurb
Our pasts were a part of us.
Definitively.
Irrevocably.
Mine hijacked my dreams every night, drowning me in guilt
and staining my hands red.
It wasn’t just a part of me, it stole a piece of me—the
piece that stopped me from letting people get too close.
And I’d become pretty damn good at playing the untouchable
asshole card just to keep them away.
But apparently, Dakota Samuels didn’t get that memo.
From the moment she accidentally walked in on me naked, she
began to demolish any and every wall I’d ever built.
She was sexy and tenacious.
And I was addicted to the way she looked at me.
To the way she fought for me.
To the way her body felt beneath mine.
We were both done with running from the demons of our pasts.
They were going to find us.
They were going to try and destroy us.
And they may have won before, but like hell I was going to
let them take her from me too.
Because if they tried, this time the blood I saw in my
dreams would be theirs.
ADD TO GOODREADS 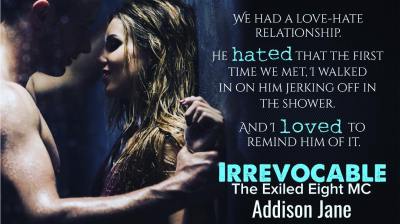 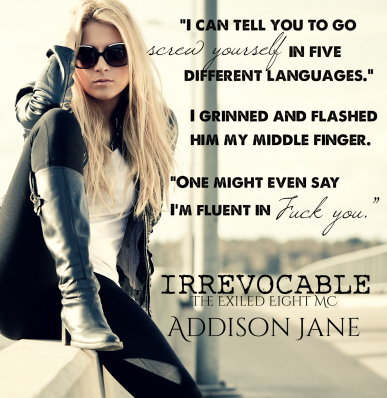 Let me start off by saying, if you know me, then you know I’m a huge Addison Jane fan!  If I’m ever in a book funk, I know with absolute certainty her books can pull me out of it.  I am happy to report that Ms. Jane didn’t let me down!  What do you know…I was in a book funk and this book popped up on my kindle so I dove right in and she pulled me out of the week long book funk I had been in!  If you’ve never read an Addison Jane book before, you truly are missing out.  And guess what?!  Now is the perfect time to start!  Irrevocable is the first book of her new MC series.  I have read and loved her other MC series (The Club Diaries) and was thrilled to find out she has a new MC series beginning! I have already fallen in love with some of the other characters in the Exiled Eight.  Irrevocable is Rip and Dakota’s story.  And let’s just say Rip and Dakota don’t exactly see eye to eye and that’s putting it mildly.  These two are constantly at each other’s throats and are great at pretending the sizzling chemistry that happens whenever they are in a room together doesn’t exist.  I loved watching them fall, especially Ripley.  He swore up and down that an old lady was not what he ever wanted in his life.  Dakota was just a force too strong to be reckoned with.  I am so not so patiently waiting for the next book in the series now.  And I can’t wait for Drake’s story.  I’ve already fallen for him 😉
Author Bio

Addison
Jane is a born and bred kiwi girl with a passion for romance and writing.
When she
gets the chance she enjoys the little things in life such as reading, dancing,
music, and Facebook, but her world really revolves around the little girl who
calls her Mum. It’s an awkward balance between alpha males and Disney
princesses but it works.
Growing up
on a small farm next to the beach will always make her a country girl at heart.
But since moving away to a small town close to the city she’s discovered a
dangerous love for shopping.
Writing
stories has been something that’s come naturally since she was young, and with
the massive support of her friends and family, she finally decided to step out
of her comfort zone and share them with the world.
She enjoys
bringing her books to life with strong female leads, sexy passionate men and a
rollercoaster of twists and turns that lead to the happily ever after that her
readers desire.
Author Links
FACEBOOK PAGE
FACEBOOK PROFILE
AMAZON
INSTAGRAM