Maddie
I’ve loved Hendrix Cole ever since I was a little girl.
From the moment I first saw him, I knew that one day, he’d be mine.
And he was. At least… until he threw it all away.
I gave Hendrix my heart and he shattered it into a million pieces.
I begged him not to leave. Still, he walked away.
It’s been six years since I’ve seen him.
But now a cruel twist of fate just brought us face-to-face.
He swears he never meant to hurt me.
He begs me for another chance.
I still love him. Always have. Always will.
But can I trust him?
Losing him once almost killed me.
I won’t survive if it happens again.
Hendrix
I’ve loved Maddie Davis ever since I was a kid.
From the moment I first saw her, I knew that one day, she’d be mine.
I was right.
Maddie gave me her heart and I gave her my ring.
But like the screw-up my father says I am, I blew it.
Before I could explain, she vanished.
Our love? Gone in the blink of an eye.
I know I hurt her and I hate myself for it.
Now she’s back.
This is my chance.
I won’t let her walk away.
Not again.
Maddie is mine.

J.E. Parker is an American romance author who was born and raised in the great state of North Carolina. A southern belle at heart, she’s addicted to sweet tea, Cheerwine, and peach cobbler.

Not only is J.E. married to the man of her dreams (albeit a total pain in the rear), she’s also the mother of a herd of sweet (sometimes), and angelic (only when they’re sleeping) children. Despite their occasional demonic behavior and bottomless stomachs, J.E. loves her little tribe more than words could ever express.

On the weekends, you can find her sitting on the couch, cheering on (or cursing) her favorite football team, stuffing her face with junk food, and guzzling a bottle of cheap red wine.

When she’s not busy making sure her husband doesn’t burn the house down or acting as a referee for her fighting children, J.E. enjoys reading, writing (obviously), and listening to a wide variety of music. 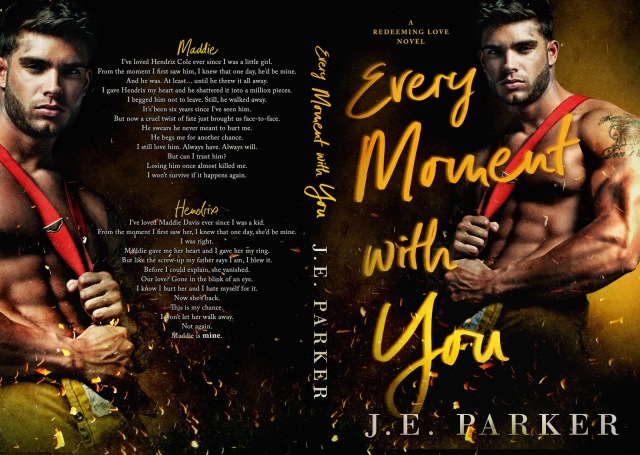