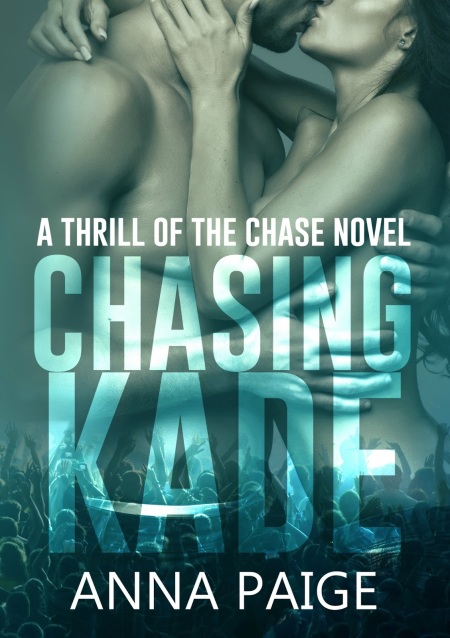 Title: Chasing Kade
Series: Thrill of the Chase #1
Author: Anna Paige
Genre: Contemporary Romance
Release Date: March 17, 2017
Blurb
There’s no such thing as too much fun…
Wrong.
Incredibly, immeasurably, categorically false.
Try: It’s all fun and games until someone ends up in the tabloids.
Again.
Kade Edenfield was rock royalty. If every rock god in history gathered for dinner, his seat would be at the head of the table. He was that good. His band was elevated to a level few ever reached, and he was having the time of his life.
Until one misstep too many landed him on the front page of every gossip rag around the globe, and the band’s label decided to saddle them with a PR priss whose sole mission in life was to suck the fun right out of his.
He wanted her gone.
Until he realized he just plain wanted her.
Aubrey Taylor didn’t ask to be assigned to babysit a band full of troublemakers, but she wasn’t given a choice. Wanted or not, she intended to fix the mess they’d made. She’d do it quickly, efficiently, and then she’d get the hell out of there. Unfortunately, after meeting their openly hostile singer—the one with the notoriously menacing stare—it was clear she was in over her head. When Kade made a point to challenge her at every turn, unafraid of using intimidation to get her to back down, she found herself in even deeper trouble.
While she ‘officially’ resented and feared him, their power struggle secretly turned her on.
She desperately wanted to win their little standoff, but what was she supposed to do when she realized she wanted him even more?
ADD TO GOODREADS 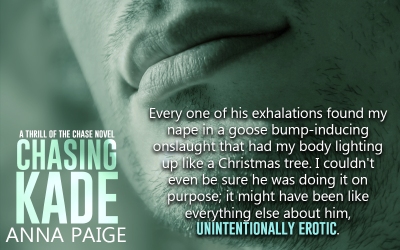 Excerpt
I turned back to the table, not wanting to look at Kade. “Are you aware of how many groups have formed strictly for the two of you?” I asked Kane, navigating away from the hoo-ha pic as quickly as possible and looking up the largest group I’d found. “This one is dedicated strictly to the pursuit of ‘doubling down’ with the Edenfield twins. It’s scary how many thousands—thousands—of members are in this group. All looking to hook up with the two of you. I only found it because the recent pics of Kade have been photoshopped so many times by this group. They’re using a mirror image of Kade, shifting it until it looks like both of you are there, then adding themselves to the pic so they appear to be sandwiched between the two of you. And some of them look startlingly real. That’s how I discovered the group to begin with, I was half-convinced the pics were genuine when I first saw them.”
My fingers flew over the keys, navigating the discussion boards. “They even have ‘elite’ and ‘platinum’ members who all swear they have hooked up with at least one of you—those are platinum—and sometimes both of you—that would be the highly-coveted elite status.” I rolled my eyes, scrolling the list. It was suspiciously long, which made it even less believable than it already was.
Kane leaned over, eyeing the list. “I’d like to think I’d remember all of those.”
“Yeah, but a few might be legit.” This from Kade.
Kane and I both spun to look at him.
“The fuck, dude?” Kane cut his eyes to me. “That’s on the ‘need to know’ list and she didn’t need to know.”
I sat there for a minute trying to school my expression so that they couldn’t see the shock on my face. My mind was trying to formulate a response but I couldn’t conjure a single appropriate reaction.
“Oh, I’m sure she already knows all of our dirty little secrets. How else can she be expected to fix us if she doesn’t know exactly how fucked up we really are?” He glared at me. “Bet that’s why she’s so afraid. She’s seen all the skeletons in the closet.”
“She didn’t know, dumbass. Look at her.” Kane sounded concerned enough that I was momentarily convinced he’d start snapping his fingers in my face to try and check my response. “She’s… I don’t know what to call it… stunned? Appalled?”“Intrigued?” Kade hungrily dragged his gaze along my face and neck. 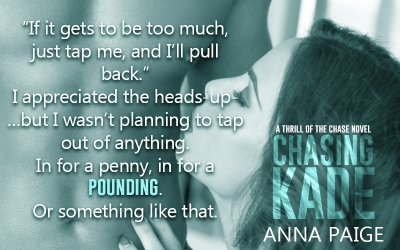 Rockstars are my weakness. I can never pass up the chance to review a new rocker romance. This author is new to me so I wasn’t quite sure what to expect but am happy to report that Anna Paige knows how to write about rockstars! Kade is broody and set in his ways so when Aubrey Taylor shows up to basically babysit the band, it doesn’t go too well with him. He has a twin brother Kane, who is total opposite as far as personalities go. Aubrey wishes that she could be attracted to Kane’s fun and laid back attitude but something about the moody singer just does it for her. Kade and Aubrey are constantly snapping and insulting each other, and the banter between them is just hilarious. It’s actually probably my favorite part of the book. I loved watching them go back and forth. So if you’re in the market for a new rocker romance to try out, then I do recommend giving this one a click!
Author Bio
Anna Paige is the author of the Broken series; Broken Ground, Flawlessly Broken, and All the Broken Pieces, as well as the Thrill of the Chase series. The first TotC novel–Chasing Kade–is releasing in March.She lives in a rural town in North Carolina where the only activity is the rhythmic color change of the solitary stoplight and a very real threat of being carried away by mosquitoes. The only alternative to terminal boredom is writing, making life interesting if only on the page.

Anna is happily married, with one amazing son and a pair of hilarious pets. When she’s not writing, she’s trying to make a dent in her TBR pile. Given that she’s constantly adding new titles to the list, the chances of her ever finishing are slim.

And she’s completely fine with that.