Living in Southern California, Cheyenne was used to seeing hot military men as she went about her daily business. An anonymous encounter at the grocery store cemented her crush on one such man. He was big, built, and incredibly easy on the eyes, but it wasn’t as if he would ever really notice her.

Always in control of any situation, Faulkner “Dude” Cooper knows explosives. As a bomb expert, he’s lived through many high pressure situations. Disfigured by a bomb while on a mission, he’s used to being looked at with pity. When he’s called to a local supermarket to assist the local PD, the last thing he expects to find is a generous act of kindness performed by a beautiful, amazing woman. Enchanted by her selflessness in the face of danger and intrigued by her actions to save civilians she didn’t know, Dude’s hooked.

Dude was able to save Cheyenne from the group of thugs trying to take her life, but when the past comes back to haunt them both, sometimes having the knowledge and the desire isn’t enough to beat the countdown of the clock. 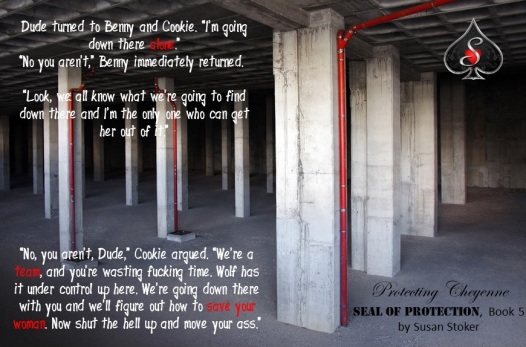 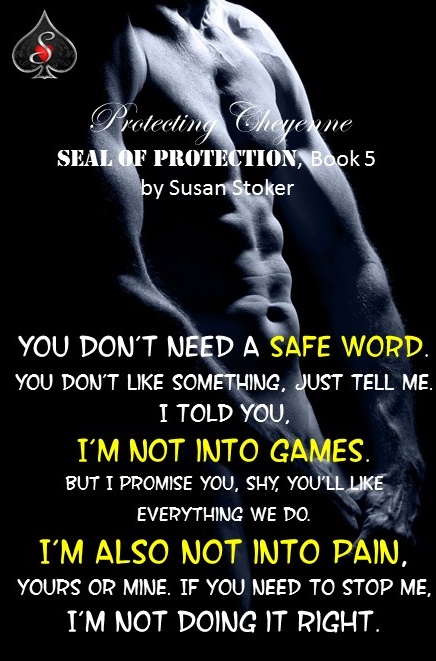 “You’re hot. I’m assuming you know this.” Cheyenne sounded like she was imparting some deep dark secret to him.

“Shy…” He didn’t disagree, but he didn’t agree either. She was extremely charming all drugged up. Dude shuddered to think about her actually driving in this condition.

“Seriously, you are. I don’t know why you’re here though. Did you lose a bet or something? Are your buddies around somewhere ready to bust out and laugh?”

“What?” Dude was getting pissed. Cheyenne couldn’t mean what it sounded like she meant.

“Yeah, no one who looks like you has ever taken a second look at me before. I’m just me. You’re…well…you’re sex on a stick.”

Dude didn’t even smile at her words. She had to be kidding him. “Hon…”

“No, really. I know I’m not a troll. I’m passable, I actually think I’ve got great calves, and I like my arms…at least I did before I had the hair completely ripped off of them. Let me tell you, I don’t think duct tape is gonna become the new fashion fad anytime soon. But I’m not the kind of woman you probably are with all the time. I bet chicks throw themselves at you. When you go out to the bar I bet you always leave with someone right? Oh shit! I bet you hang out with a gang of hotties don’t you? Jesus, You leave a wake of devastation behind you wherever you go, don’t you?”

Dude raised his right hand and covered Cheyenne’s mouth lightly. He didn’t know whether to be pissed at her assumptions, or to be flattered. When she stayed silent, and simply looked at him with wide eyes, he told her, “Cheyenne, first, there’s no fucking bet and I’m kinda pissed you’d even accuse me of something like that. I think you’re exquisite. Funny. Cute. Interesting. And there’s nowhere I’d rather be than right here, right now, with you. Second, yes, I have a group of friends and we hang out, but almost all of them are either married or in a serious relationship. We don’t leave a wake of anything behind us, because we only have eyes for our women.” Dude didn’t even stop to think about what he was saying, that he was suddenly including Cheyenne in his thoughts and words.

“I hope like hell when you wake up in the morning and the pain pills have worn off you’ll remember this conversation and want to hang out with me and my friends. You’re like them more than you know.”

Dude smiled at the look on Cheyenne’s face. She hadn’t picked her head up off the head rest, but watched him with serious eyes.

“But you’re perfect…” She mumbled the words around his hand and would’ve said more, but Dude interrupted her.

“I’m not even close to fucking perfect. I’m kinda a slob, I have a tendency to throw my shit on the floor until it annoys me too badly and I have to put it in the hamper. I have a temper, but I’d never raise my hand to you or any other woman. I’m controlling and like to be in charge. And…” Dude held up his left hand, reminding Cheyenne of his disfigurement. “Enough women have told me this is disgusting, or just plain gross, for me to think I’m anything but perfect.”

Susan Stoker has a heart as big as the state of Texas where she lives, but this all American girl has also spent the last fourteen years living in Missouri, California, Colorado, and Indiana. She’s married to a retired Army man who now gets to follow her around the country.

As Mr. Stoker says, Susan has been training to become a romance author her entire life. She’s been reading romances since middle school and writes what she loves.

She debuted her first series in 2014 and quickly followed that up with the SEAL of Protection Series, which solidified her love of writing and creating stories readers can get lost in.